Blyth PowerBlyth Power were formed in 1983 by singer and drummer Joseph Porter. Even after thirty years the band still entertain and surprise audiences with their blend of folk and punk sounds, storytelling lyrics and baffling references to trains.The Metatrons"..jangling pop...that will make your day" Norman Records"Such a sweet sound...cracking!" Amazing Radio"...a real indiepop treat" REPEAT zineThe Metatrons are a new-wave style riot-pop band, with lots of melody and heaps of tune under the fuzzy guitars! Formed in 2011 and releasing their debut album "Between Planets" the same year, the band played with the likes of The Primitives and Echobelly, before releasing their 2nd album - "Patterns of Chaos" (esprit de corps records, 2016). This album received great reviews and airplay on 6music, Amazing Radio and many more. The video for the single, "Smile (don't let me down)" was played on SKY TV several times and earned the band lots of new fans. After several years of touring and playing with Altered Images, The Membranes, Dodgy, The Subways, The Blockheads, Shonen Knife and more the band began work on their 3rd album, "Deconstruction" for the newly-resurgent CHAPTER 22 records and is due for release in May 2020, followed by a tour and festival appearances over the summer. themetatrons.co.ukFacebook.com/TheMetatronsthemetatrons.bandcamp.comPhilip JeaysThe spirit of French chanson funnelled through the tragicomic scorn of a bloke from Eastbourne. Backed tonight by his talented band, Philip Jeays will serenade you with songs that are by turns heartbreaking, bitter and hilarious.£7 tickets: https://www.wegottickets.com/event/496177Doors at 7.30pm.DJs after the bands until 2am. 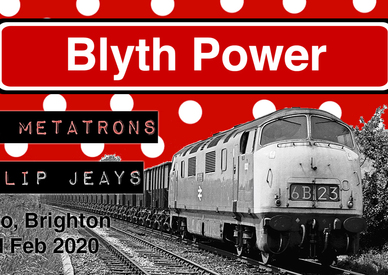