Accidental Meetings team up with Billy Nasty's Electrix Records for their 20th year anniversary to present a night celebrating the launch of London Modular's 'We Are The Mod" EP!The night entails London Modular's Live set, Billy Nasty and a debut Live set for Assembler Code who features on the EP with a killer remix.London Modular Alliance (Live)DJ Billy NastyAssembler Code (Live)In 2000 Billy Nasty launched Electrix Records as an Electro sub-division of his already successful Techno label, Tortured. Since its first of many releases by Zeta Reticula (the - at that time - brand new Electro pseudonym of Umek), Electrix has gone on to deliver quality releases from the likes of Carl Finlow / Silicon Scally, The Advent, RadioNasty (Billy’s collaboration with the mighty Radioactive Man), Transparent Sound, dynArec, Mr Velcro Fastener (a.k.a. Mesak) and many more. Launching its 20th anniversary year is none other than London Modular with the ‘We Are The Mod!’ EP featuring 3 new original cuts plus a remix by Assembler Code.For anyone who’s been living in a cave for the last few years London Modular Alliance (appearing here as London Modular) is a collective that lies somewhere between a shop and a cult. From their base in the former industrial warehouses of Hackney Wick, London Modular have been designing their own cases, working out practical ways of chaining multiple synths for live performance, selling units from their shop front, and taking themselves on the road to run workshops and gigs. From the lazer-lit confines of sweaty clubs to the hushed environs of Tate Britain and the V&A, they fill spaces with the whoosh and sweep of man co-operating with machine, bringing the dynamics of dance music to the ideals of modular synthesis, and forcing anyone with ears to acknowledge the potency of the format once more. With them, the sound of the future has returned.From the metallic tones and deeper-than-deep bass of opener ‘Concerning Irregular Figures’ to the jerking electro-funk-meets-dub of ‘Glove Box’, via the squeaking and squelching of ‘Exit Strategy’, it’s clear London Modular, as ever, mean business. Meanwhile Aussie Electro protagonist, Assembler Code who has been an integral part of the modern Electro scene, often working alongside fellow countryman, Jensen Interceptor, goes it alone here for a ‘Glove Box’ rework that tweaks the tempo and ups the acidity for maximum dance floor impact.We are the mods, we are the mods, we are, we are, we are the mods!Tickets on RA & a extra special competition to be announced soon.Artwork by Ciaran Birch. 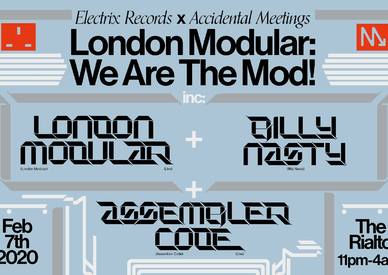