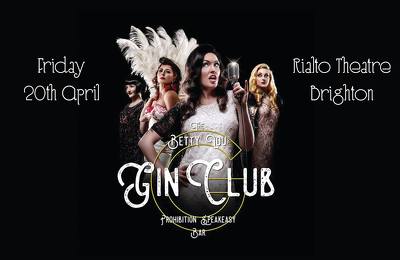 As is tradition, the location of Speakeasy venues during the prohibition era was kept top secret. Only in rumours would those in the know be able to track down the hidden doorways that lead to the scintillating underworld of flappers, Charleston dancing, sequins, frivolity and low quality alcohol.

In Brighton the whisperings have been circulating since The Betty Lou Gin Club hosted their last Speakeasy event in November 2017 and the question of everybody's lips has been ‘when and where will the next one be?’

Well Brighton, as this isn't the 1920s and we are not under prohibition, we can reveal to you that the Betty Lou Gin Club returns to you on April 20th at their new home, The Rialto Theatre, with their most star studded Speakeasy Spectacular to date!

Compered by Jack Kristiansen and with top performers including burlesque artists Sirona Thorneycroft and Lena Mae Lenman, hula-hooping extraordinaire Kiki Lukula, as well as magic by John Welles, the sultry singing styling Lulu Vesper and Songbird Sally and even a Charleston dance class, an evening with The Betty Lou Gin Club is sure to tantalize your senses. Electro Swing DJ Nick Subtle will also have you dancing until the early hours, fully immersed in the dazzling grandeur of the golden era.

The Betty Lou Gln Club launched in Brighton in March 2017 and hosted four successful events, three at Stanmer House under ‘The Betty Lou Gin Club Presents The Stanmer Revue’. For 2018 though The Gin Club has decided on a new more authentic venue in central Brighton. The Rialto Theatre is a glorious grade II listed building and the theatre and club area comes complete with high-end professional lighting and quality sound.

‘Our Speakeasy club nights were a massive hit in 2017. In 2018 we are taking it up a notch and aiming to balance the authenticity of an intimate speakeasy night with the high energy and glamour of the roaring 20s. We feel that our new home of The Rialto Theatre is the perfect place to deliver these really special evenings, and bringing it more centrally to Brighton makes it easier for attendees and embraces the city’s diverse, fun and vintage-loving culture.’

So throw on your best 1920s gladrags and experience Brighton’s most spellbinding Speakeasy Club night. This event promises to be truly authentic, except for one important detail; drinks at this prohibition evening will be of the highest quality!

Book your tickets at https://www.skiddle.com/whats-on/Brighton/Rialto-Theatre/The-Betty-Lou-Gin-Club-Speakeasy-Spectacular/13159166/