Am I Invisible Yet? (The existential angst of Dunstan Bruce)

Premiering at The Rialto, 'Am I Invisible Yet? (The Existential Angst of Dunstan Bruce)' is written and performed by former frontman of the anarchist pop band Chumbawamba who are best remembered for their 1997 global hit Tubthumping (I Get Knocked Down).

Directed by BAFTA-winning Sophie Robinson this one hour, one-person show finds Dunstan feeling increasingly invisible, impotent and apoplectic whilst staring into an existential abyss. How did he end up here? How does he become unstuck? Because right now he's struggling with the fact that the world seems to be going to hell in a handcart and he's wondering where did it all go wrong? For him. For humanity.

Am I Invisible Yet? is Dunstan's personal irreverent voyage told through poetry, prose, music and projection. Full of despair, anger, love and ultimately hope this journey will resonate with everyone who once thought they could change the world but also act as a cri-de-couer and a kick up the arse from a performer who once graced the biggest stages in the world but now finds himself determined to get back up again... 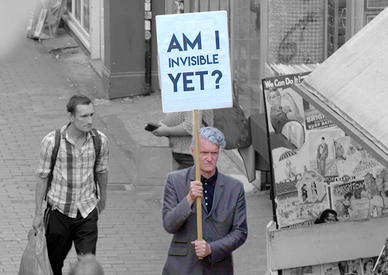