Biscuit Barrel: No Time to Digestive

69 sketches in the space of an hour! Hyperactive comedy group Biscuit Barrel return to Brighton Fringe! A quickfire sketch show with a mechanical murderer on-the-loose - no character is safe!"Dropped something? Don't even think about picking it up as you may miss an entire sketch" The List.As featured on BBC Radio Bristol and Comedy Crowd TV, this time a copyright-friendly robotic threat from the future is tearing through the sketch show and killing every fictional thing in its path. It's on one brave and very confused detective to journey into the show and stop this menace before all the show's content is destroyed. High-octane humour that puts the speed of the internet onto a stage."Fast, slick and very funny." ★★★★★ The Derek AwardsThe Barrel have also been seen at Edinburgh Fringe, Winchester Comedy Festival, Durham Fringe, Guildford Fringe and London Comedy Film Festival. 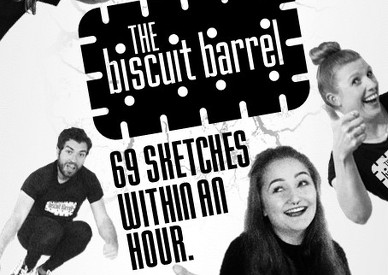