Done to Death by Jove!

'The 39 Steps' meets Agatha Christie via Holmes and Watson! A cast of six bring a comic flurry of suspects and sleuths together to discover whodunnit, and how... Except, well... four of the cast are stuck by the side of the M6 in the broken-down van, and only those two knights of the theatre – Sir Gavin and Sir Nicholas - have managed to get to the venue... but ‘the show must go on’... what could possibly go wrong!?Comic clichés from the Great British Detective genre - a substitute set, missing costumes and cunning detective work abound in this genre-busting farcical comedy from the "Masters of inventive silliness!” That’s if the two of them can get through the play at all without losing the plot. Literally.

It’s not a new idea – it’s been 'Done to Death, by Jove' – but not like this...Warning: Contains hats!”Robertson and Collett are exceptional” (Kansas City Star) 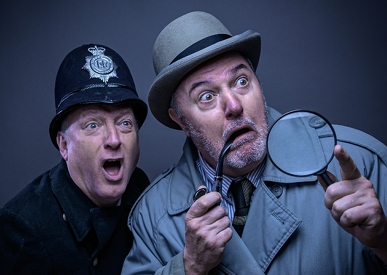