We're back at our favourite spot with 3 of the best about. All unbelievable DJs & Producers in their own right, we can't wait to see them have it out in the 150 cap Rialto.Line up:LocalForest Drive WestWaltonMetristForest Drive West - [Livity Sound / Whities] Since 2016, Forest Drive West release catalogue has been growing and growing. With a huge amount of diversity, it's seen records on labels such as Livity Sound, Rupture, Whities & Neighbourhood. His sound has created a significant impact in not just the UK underground but far beyond, which lead to RA featuring him in their 'Breaking Through'. Few can match his range of sound from Jungle to atmospheric Techno which all show significant level of intricate sound design & percussive led complex rhythms. Already an accomplished DJ he has toured all over, playing at the biggest venues & fesitvals across the world. We can't wait to see what he brings to the little Rialto.Walton - [Tectonic / Ilian Tape / Hyperdub]With nearly a decade’s worth of releases, Walton needs little introduction. From labels such as Hyperdub, Kaizen, Keysound, TectonicRecordings and now Ilian Tape, it’s fair to say how instrumental Walton has been and is at the forefront of the UK scene. His productions and sets touch the edges of Dubstep, Grime, Garage, Techno & Bass and we can't think of anyone better to close out the Rialto, we're well excited.Artwork as always by Ciaran Birch xTickets on RA 18+ 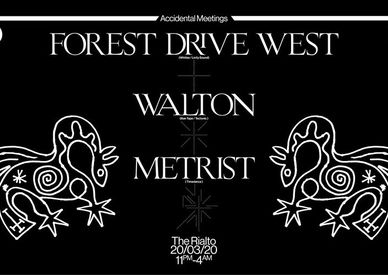