The Best of Miss Hope Springs (...it's a very short show)

Brighton Fringe 2021 Award Winner, Miss Hope Springs, recently celebrated a decade of decadence as resident songstress at London's premier cabaret room, Le Crazy Coqs, in Piccadilly with a week of shows. And now, for those of you who couldn't make it to town, she is bringing this glittering evening of laughter and song to the Brighton Fringe for 3 nights only.

As usual, live at the piano, La Springs will take you on a trip down a by now rather potholed memory lane, revisiting some of the many shows she's created over the years: Je m'appelle Hope, Latin Ala Springs, Blood Sweat and Sequins and Vegas to Weimar to name a few. You'll hear a miss parade (as opposed to hit parade) of self-penned vintage Vegas toe-tapping show tunes, heartfelt torch songs and hysterical point numbers from her numerous as yet unreleased LPs and un-staged musicals.

Be prepared for your favourite sing-a-long musical numbers such as January Jones, Funny How Things Work Out, Mrs O'Toole, Carnival and of course her biggest hit...The Devil Made Me Do It. She will, as ever, dish up scandalous showbiz stories from her Ritz to the pits life in LA, Paris and...Dungeness.

'A character of uncanny comic accuracy...Exquisitely funny and remarkably engaging' The Stage

'Comic finesse and just the right amount of poison...The adept chanteuse tickles the ivories and other funny bones with abandon'  This Is Cabaret 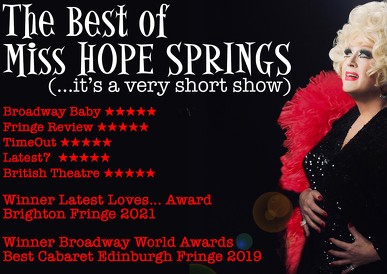